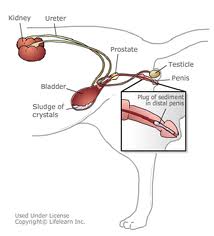 Urethral obstruction is a condition in which the urethra, the tube that transports urine from the bladder to the outside of the body, becomes blocked. This condition is one we see regularly in the hospital, and will be fatal if not treated.

“Blocked cats” as they are commonly referred to, happens more often in male cats than females because the male urethra is much more long and narrow than the females. Obese cats are also more likely to be affected.

Many conditions can cause a cat to block. Sometimes it is a physical obstruction, such as a urinary stone, urinary crystals, or “sludge.” Other times, physical spasms of the urethra prevent the passage of urine.

As the process progresses, cats will frequently lay down and just meow in pain. They may be abnormally aggressive when picked up because of the pain and pressure their bladder is placing on their abdomen.

Further into the disease process, kidney failure may develop, causing lethargy, vomiting, diarrhea, hypothermia, and death if the obstruction is not relieved in time.

If your cat is experiencing any of these symptoms, you should call your vet immediately. It does not take expensive diagnostics for a vet to know what is going on; a simple abdomen palpation will reveal a large distended bladder. The penis may be protruded, bleeding, or purple.

Treatment:
Treatment is different for each cat. Radiographs, ultrasound, or both may be recommended, along with blood work. Relieving the obstruction under sedation, and ensuring the patient’s electrolytes and kidney function are stable is of utmost importance. Hospitalization for at least one night, and usually more is almost always needed.

Prognosis and Follow-up:
If a cat blocks once, he is predisposed to blocking again. A simple change in diet may help prevent a re-blockage; however, cats with frequent recurrence of blockage may have to be treated with a surgical procedure called perineal urethrostomy (PU). This procedure removes the penis (yes, you read correctly) and in so, the narrowest part of the urethra which most often becomes blocked. Feeding wet or moist food also may be indicated as it keeps the urine less concentrated, decreasing the risk of recurrence.
With timely treatment, most cats do survive. The next time your male cat is meowing abnormally, has decreased energy, or trouble urinating seek veterinary assistance immediately, it is a matter of life or death.

Common Symptoms
Dogs suffering from UTIs don’t always show symptoms in the early days of the bladder infection. Some dogs never exhibit any symptoms. One of the early signs of a bladder infection is a housebroken dog suddenly urinating in the house or another inappropriate area. Other common symptoms include the dog straining to urinate, dribbling urine and urinating more frequently or in smaller amounts than usual. Often the dog’s urine will be bloody, foul-smelling or cloudy. Many dogs will have an unexplained increase in thirst.

Other Symptoms
Although not common, some dogs with bladder infections exhibit a distinct loss of appetite and a lack of energy. Other uncommon signs of a dog bladder infection include vomiting, fever and constantly licking the genital area. In some cases, an infected dog reacts when the owner pets his belly because the lower stomach area is tender and sore. Although most dog bladder infections are not medical emergencies, the owner should schedule an appointment with a vet as soon as possible. Early treatment can help relieve some of the dog’s pain and discomfort, and can also help prevent the infection from becoming more serious by ascending into the kidneys.

Diagnosis
Diagnosing a dog bladder infection is a fairly simple process for a veterinarian. The dog’s bladder is checked for any abnormal tenderness or unusual firmness. A urine sample is collected for analysis – to test for bacteria, blood, pH levels, white blood cells and other abnormalities. If a dog has suffered with numerous bladder infections, the doctor might request an ultrasound or X-rays to check for bladder stones or other medical conditions that encourage the growth of bacteria.

Treatment
First-time, uncomplicated dog bladder infections are typically treated with a course of antibiotics. Most antibiotic treatments last from 10 to 14 days, although more severe cases might require low doses of medication for six months or longer. Antibiotics should be given to the dog at bedtime so the medication stays in the body longer and has more time to fight the infection. The dog should also be given access to plenty of fresh, clean water to help flush the bacteria out of the bladder.

Possible Complications
The long-range consequences of an untreated dog bladder infection might include kidney failure or septicemia, which occurs when the bacteria gets into the bloodstream and infects other organs. Septicemia that infects the intervertebral disk can cause discospondylitis, while bacterial endocarditis is caused by septicemia which infects the lining of the heart and the heart valves. Male dogs commonly suffer from bladder infections that spread to their prostate glands where it can cause abscesses to form.

Considerations
Female dogs typically accumulate bacteria in their vaginal area, while males commonly have bacterial growth in their prostate. The bacteria then moves into the urethra and is transferred into the dog’s urinary tract. Bladder infections are more often seen in female dogs than males because they have a shorter urethra that allows the bacteria to accumulate and spread more quickly. Dog owners can help to prevent canine bladder infections by giving dogs plenty of clean water, allowing them the opportunity to urinate regularly and by keeping the perineal area clean and free of dirt and feces.