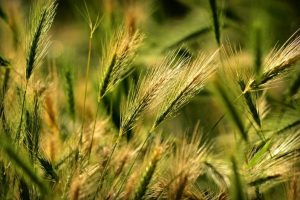 Foxtails cause numerous problems for pets. Foxtails commonly embed in the skin, ears, eyes, and nose.   If your pet eats seeded grass, they may lodge in the throat, particularly behind the tonsils.   If your pet squats low, they can also move into the penis or vulva.   The sharp endpoints and microscopic barbs of foxtails ensure travel in only one direction – further inside the animal’s body. Once inside, foxtail removal becomes a surgical procedure and must be done by a veterinarian.

Geography affects risk.  Foxtails are very common in some areas (such as northern California), and less common in others (such as dense forests or deserts).

Due to feline grooming habits, foxtails are less likely to remain embedded in the skin of cats than of dogs.  However, foxtails commonly get stuck in a cats’ eye.

Animals with long, thick hair are more likely to attract and collect foxtails.  Foxtails may blend in and go unnoticed (and therefore un-removed) in animals with tawny or straw-colored hair.

The CVMA recommends regular grooming of all pets that spend time outdoors. Without this, foxtails can become embedded in animals’ coats, eventually piercing their skin and causing infections.

Foxtails may get lodged around the eyes, nose, mouth, ears, coat, and paws. Pet owners should be aware of the following signs, which may indicate the presence of foxtails:

Don’t Delay contacting us if you notice any of the following:

The skin and the area under the skin are the most common sites for foxtails in pets. The most frequently affected areas are the feet (especially the webbed areas between the toes) and the anterior portions of the chest and shoulders.  Foxtails embedded in or under the skin cause swelling, pain, redness, and drainage of clear or bloody fluid from the site.   Pets often lick the affected area of skin, and hair loss may occur.   Limping is common if a foxtail is embedded in the foot.

Foxtails located in the eye cause severe swelling, pain and discharge in the affected eye.  The eye usually will be held tightly closed.

If located in the nose, foxtails usually cause violent sneezing (cats, dogs).  Mucus or blood may drain from one nostril.

Foxtails located in the ear may cause head shaking, scratching or pawing at the ear, and an abnormal posture with one ear tilted downwards.  An ear infection may develop in the affected ear, or the eye on the affected side may begin to appear abnormal.

Foxtails that lodge behind the tonsils may cause a dry, honking cough (cats, dogs) or frequent, hard swallowing.

Foxtails that migrate through the body can lodge in the lungs, heart, or other internal organs and may cause severe lethargy, lack of appetite, weight loss, coughing, or difficulty breathing.

Regardless of location, foxtails cause pain and irritation.  They very frequently cause infection in the surrounding area.  Foxtails in the skin may cause chronic draining sores.   In the eyes, foxtails can cause ulcers and infection.  Foxtails in the ear can cause ear infections, and can penetrate the ear drum to cause hearing damage and neurological problems.